On the edge of the buffer zone of the Biebrza National Park and Knyszyn Primeval Forest lies Gmina Mońki. Due to its location, leading tourists into the Lower Biebrza Valley and one of the most valuable swamp areas in Europe, this gmina is often called ‘the Gateway to Biebrza’ which flows only a few kilometers from Mońki. Nearby lies the Knyszyn Forest Landscape Park, the ‘Narew Valley’ Natural Park and the Osowiec Fortress – a unique system of Russian fortifications from the 19th and 20th century. It was constructed in 1892 in a narrowing of the Biebrza. The fortress was supposed to close the only way through the Biebrza swamps. Osowiec, like the French city of Verdun, claims to have a European fortress that was never conquered. In Osowiec there is also the seat of the Biebrza National Park.
Situated on the border between Lithuania, Ruthenia and Mazovia the Mońki land welcomed settlers from the North, East and South, which was proved by the archeological research carried out in Krzeczkowo, where traces of an early medieval city were found.
The name Mońki first appeared in historical documents in the 16th century. A renowned Polish linguist Stanisław Rospond thought that the name is derived from the surname Moniek, which in turn is a polonisation of the word ‘monja’ (stomach in Belarusian). According to other historians, the name comes from a local noble family name Mońki of the Rawa (Rawicz) emblem, whose ancestor was a knight called Mońko. The emblem depicted a maiden in a crown and a red dress, sitting on a bear in a golden field. The modern coat of arms of Mońki refers to that traditional emblem and depicts ‘standing in a golden field, on green grass, a maiden in a red dress, with a golden crown with loose white hair and wearing white shoes, standing by a blooming potato plant with two white flowers (...)’. The presence of a potato plant on the coat of arms is no coincidence – for many years Mońki was associated with growing potatoes (it was a famous ‘potato center’) and with the annual ‘Potato Day’. Today the festival is still celebrated, but in a completely different, more modest form, and now the gmina is more famous for breeding Sokółka horses.
The modern history of the town is connected with the Białystok-Königsberg railway built to supply the Tsar’s barracks located in the village of Hornostaje. In 1881 the railway workers built a small settlement by the train station, comprised of 6 houses.
What remained of the Tsar’s army is the road connecting Mońki and Hornostaje and a building of the old railway station (now a storehouse) from 1905. In the 1930s a new train station was built in Mońki (it still exists today) and a neo-baroque Parish Church of Our Lady of Częstochowa and St. Casimir, designed by a famous architect Stefan Szyller, destroyed during WWII and reconstructed in the 1960s. In 1953, the seat of the county was established in Mońki and in 1965 it was granted municipal rights which accelerated the development of this town. The current population is 11 thousand. An important factor for tourism is the location of the town – by an important Białystok – Ełk railway line and by the road leading to border crossings with Lithuania and Belarus. In the area of the gmina there is also a bicycle trail Mońki – Sikory – Kalinówka Kościelna – Przytulanka – Mońki. 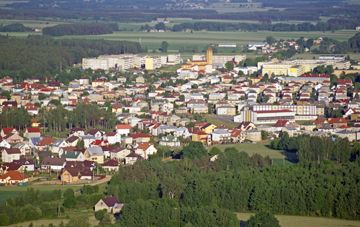