General information
The Radziłów commune is located in the southern part of Grajewo district in Podlaskie voivodeship. It is located in the area of the so-called Green Lungs of Poland and its size totals 199 km2. The settlement network of the commune comprises thirty-four villages scattered irregularly (in line with geographic conditions) with a total of 5,300 inhabitants. The average population density in the commune is 26 people/km2.
The main communication route in the commune is the regional road on the section: Łomża – Jedwabne – Osowiec. A substantial part of the commune is located in Biebrza National Park and its buffer zone. The commune village, Radziłów, is located on a big island surrounded by Wissa and Słucza marshes where Słucza ends in Kubra river, 27 km away from Grajewo. The landscape of the commune is dominated by lowland areas, mainly arable fields which comprise 70% of the total area of the commune, whereas forests comprise nearly 10%. Radziłów commune has a rich history, and local traditions and customs continue to be cultivated here. 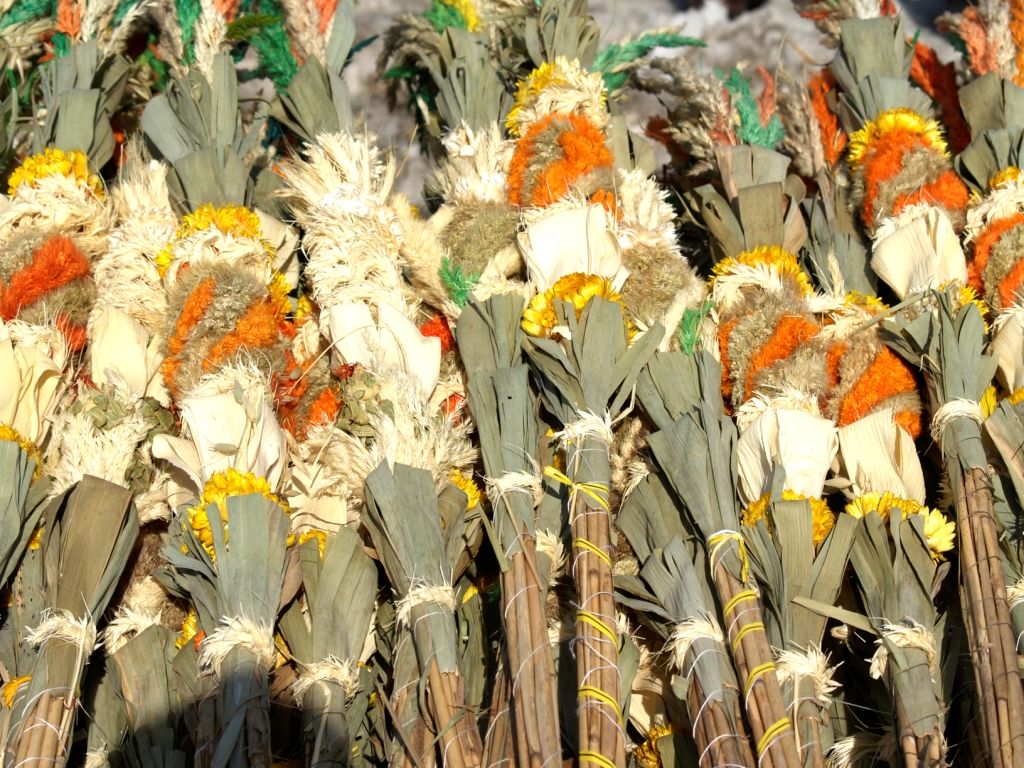 History
The oldest historical sources that cite Radziłów’s name date back to 1444. It used to be a significant town, first owned by a prince and then by the king. Radziłów was the seat of a circuit court and district council in Ziemia Wiska, which existed from 1548 until the Third Partition of Poland in 1795. The town charter was granted on 9 May 1466 by Konrad III of Masovia which granted Radziłów with the Kulm law, cropping machine and town scale the fees from which went to the flour mill repairs. The Duke set the fee at 30 Prague groschen, 10 bushels of wheat and 20 bushels of oats annually from every 18 ha.
He imposed the so-called “swaćba” fee on newlyweds and appropriate sums to buy him out from captivity and his lands from pawn. The Duke also obliged Radziłów citizens to reinforce the dam and his mill on River Słucz. The people mainly included farmers and this has remained true until today. In 1870, Radziłów lost its town charter. Currently, it seats the commune council and totals 1,201 citizens. 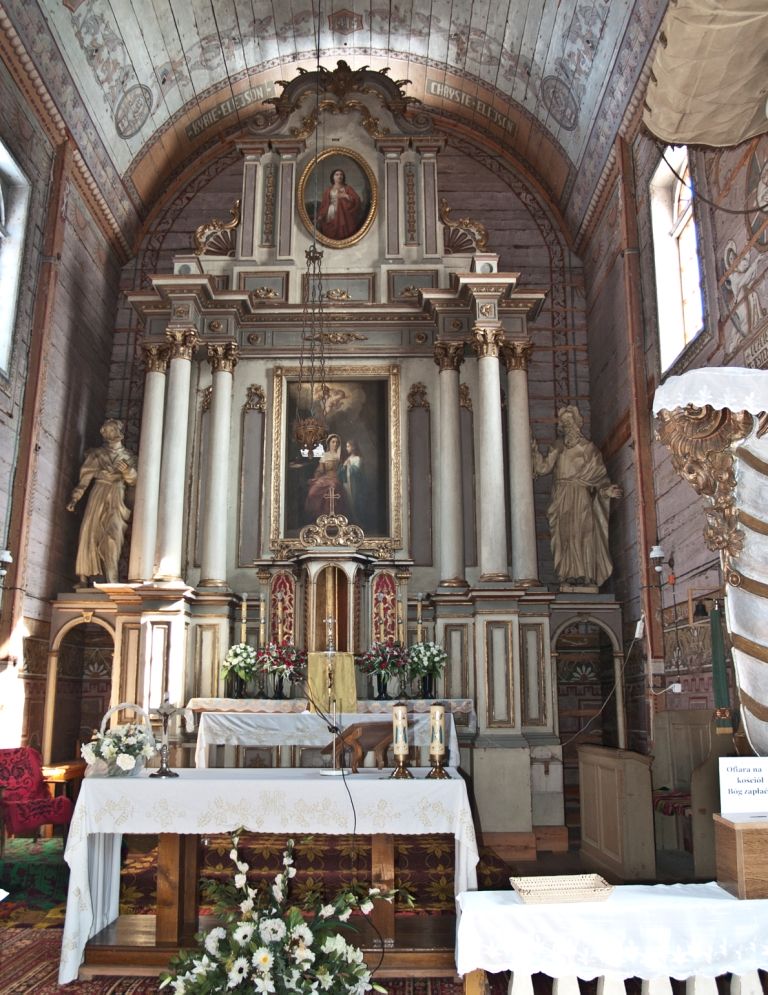 Most important heritage sites
- Church in Kramarzewo: wooden church in the late baroque style. The interiors feature an interesting pulpit in the shape of a boat, dating back to the 18th century.
- B.V.M. Nativity Parish Church in Słucz. A hall church with a nave and two aisles and a four-sided tower. The interior includes elements of Gothic Revival and Romanesque Revival.
- Manor and palace complex in Słucz, i.e. brick  manor from 1894 built in a classic style.
- War grave of soldiers who died during World War II. The grave is located in the parish cemetery in Radziłów.
- Cemetery of German soldiers from World War I in the vicinity of Sośnia, commemorated in the form of a stone monument with an information plaque.
- Cemetery of Russian soldiers from World War I in Sośnia, commemorated in the form of a granite monument with an information plaque.
- Cemetery devoted to the Jews of Radziłów, who were burned during World War II. 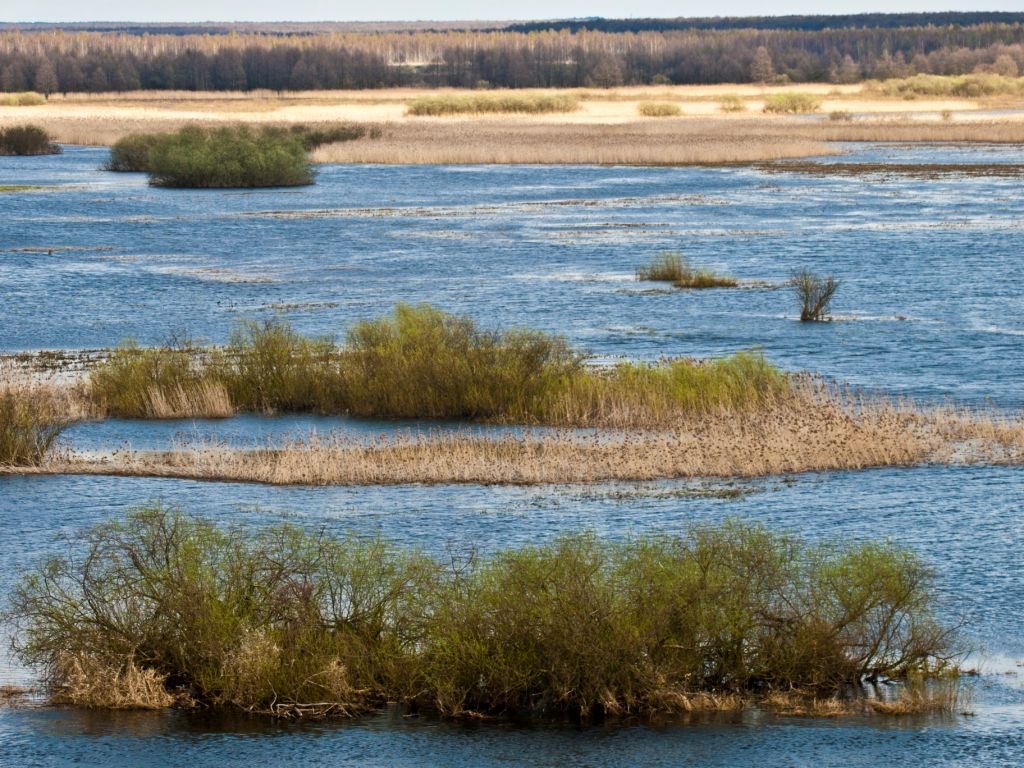 Attractions, tourist assets
A substantial part of the commune is located in the beautiful and valuable landscapes of Biebrza National Park and its buffer, which presents a chance for the local tourism development. Another attraction of the commune are tourist spots, including among others Sośnia, located inside the park surrounded by pine trees. In the vicinity of Sośnia, there is an observation tower from which you can admire numerous meanders and oxbows of Biebrza – its marshes and peat bogs create shimmering landscapes. There are also wayside crosses that you can see on almost every corner or road fork. Some of them have endured hundreds of years...Their shape, style and artistic technique differ, but all of them inspire awe and meditation.
A 110 km-long tourist car route called Biebrza Loop runs across the area of the commune. The route features numerous observation towers with remarkable views of Biebrza marshes.
The area of the commune also includes other tourist routes: a yellow walking trail (64.3 km long: Wizna – Burzyn – Okrasin – Mścichy – Biały Grąd – Klimaszewnica – Sośnia – Wólka Piaseczna – Goniądz), international bicycle route R-11 (Greece – Macedonia – Slovenia – Slovakia – Poland – Lithuania – Estonia – Finland – Norway), cycle trail Wissa Valley (Łoje Awissa – Czachy – Karwowo – (Radziłów) – Borawskie Awissa – Konopki Awissa – Kramarzewo – Dziewięcin – Rydzewo Szlacheckie), Biebrza river  kayak route, black walking trail (Mścichy – Biały Grąd), black walking trail (Sośnia – Białystok road – Ełk), planned Wissa river kayak route (Wąsosz – Bukowo – Rydzewo Pieniążek – Dziewięcin – Karwowo – Czachy – Łoje-Awissa – Brzostowo).
Tourist infrastructure is based on agritourist farms and camping sites located on the Biebrza river kayak route. Everyone who likes to get up before dawn should see the remarkable spectacle of nature coming to life – the mild layers of fog, the trumpeting call of the crane, the “bleating” of common snipe and guaranteed guest appearance of a moose. Those who like to sleep in can admire nature a few hours later, when birds of prey start their hunt.
Radziłów village has preserved its original spatial zoning to a large extent. It has only changed when it comes to the development of the street exits, which multiplied together with the growing number of inhabitants. Part of the historical development and valuable monuments have also been preserved, such as former facilities used for farming, e.g. the water mill in Karwów, which is still in operation. 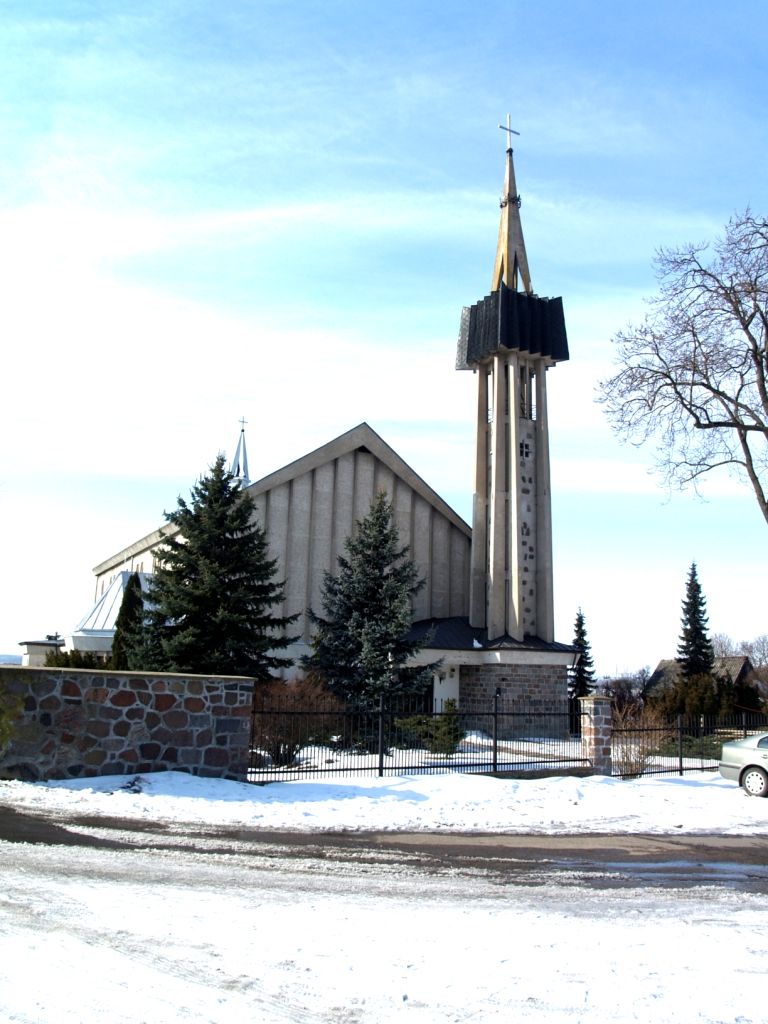 Periodical events
- Carnival – a flagship event including: a procession around the town’s square and Ziabela – a show with a pair of natural-sized puppets dragged on the cart wheel. This part goes back to the history of nobleman Jan and his wife Izabela, who squandered all their money for fun and drinking and did not get married “on time”, i.e. during the carnival, and were in turn heavily criticized by the society. The party features ugly creatures in the costume of a goat and a stork, and at the end hay bears are burned down, which symbolise ghosts to be scared away. The tradition of Radziłów carnival celebration is a dance party which lasts until midnight, when Ash Wednesday starts.
- Radziłów Days – a two-day long fair in July which takes part during the indulgence at a local parish.
- Jelonek Run – October, a road run organised for the inhabitants of the commune to promote healthy lifestyle. 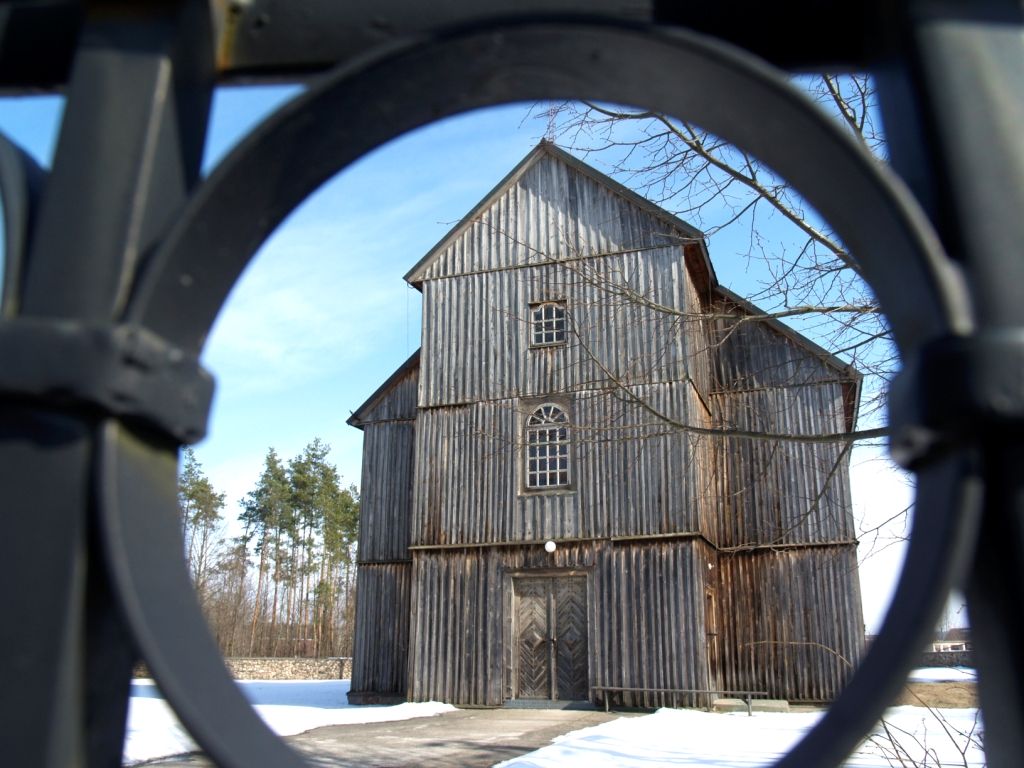 Culture
There is an active band in the commune called Kolorowy Tabor [Colourful Camp], which plays at every commune event and represents it in the contests at district and voivodeship levels.
There are four active units of Volunteer Fire Departments in the commune: Radziłów, Klimaszewnica, Słucz and Glinki – all of them equipped with new fire engines and specialist equipment. The Radziłów fire brigade also has a young team of volunteers active in the brigade. Fire brigade units take preventive measures by increasing children, teenagers and other citizens’ awareness regarding fire threats.
There is a Local Library in the commune which conducts workshops for every age group, ranging from primary school children to senior citizens. 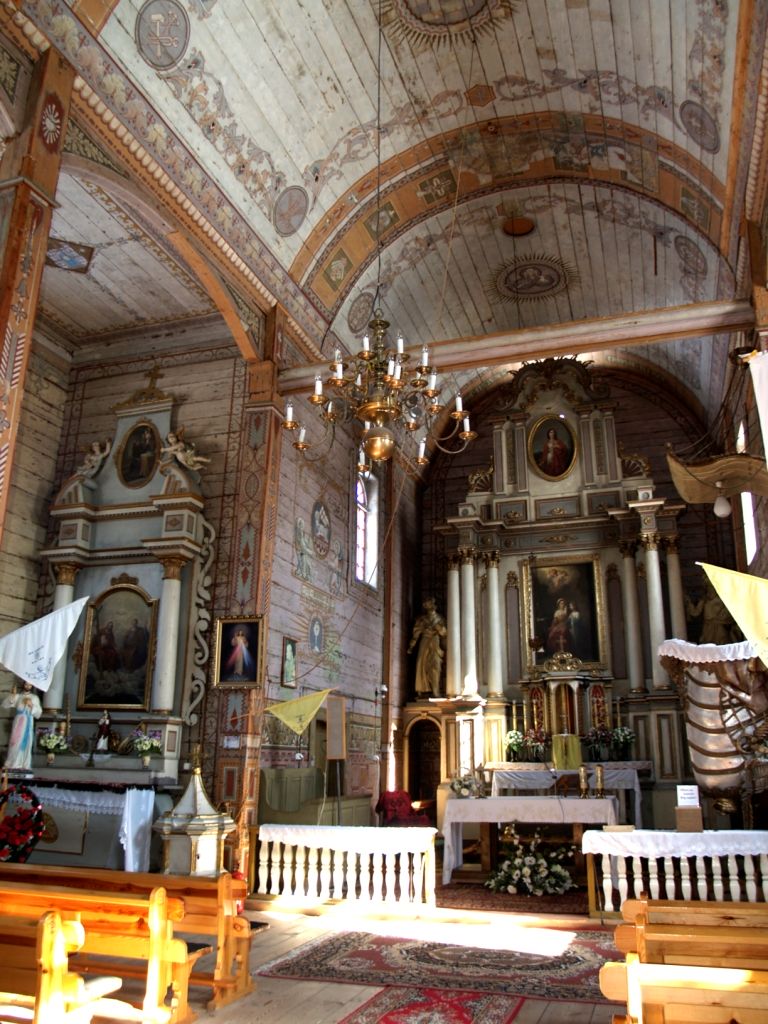 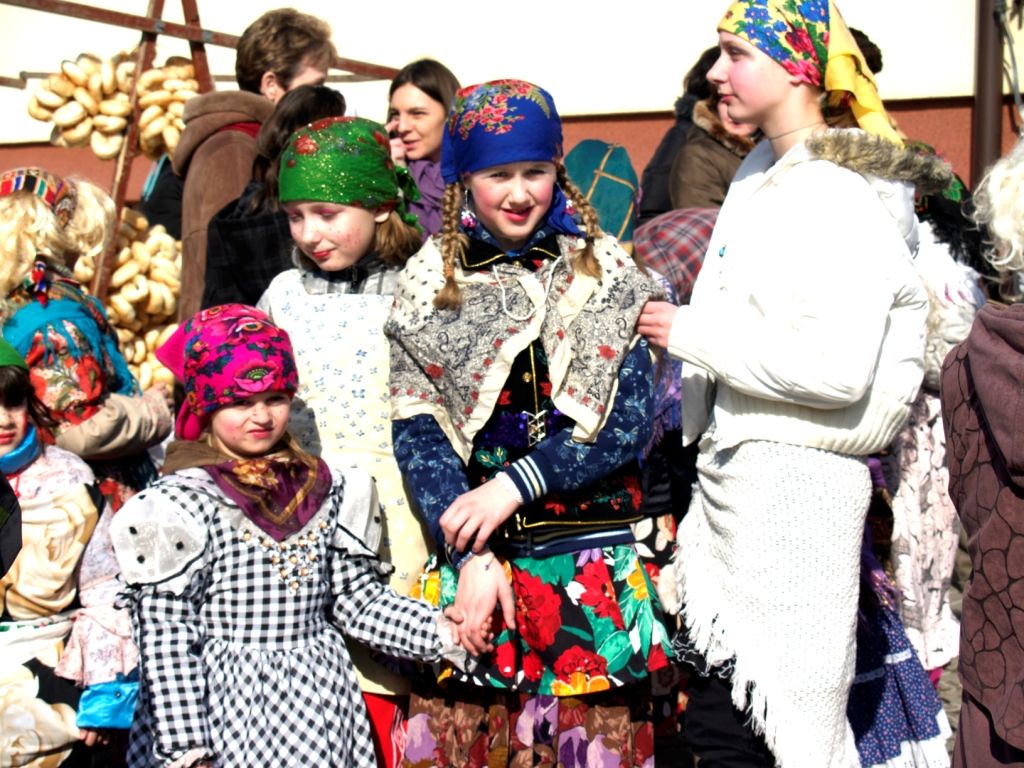 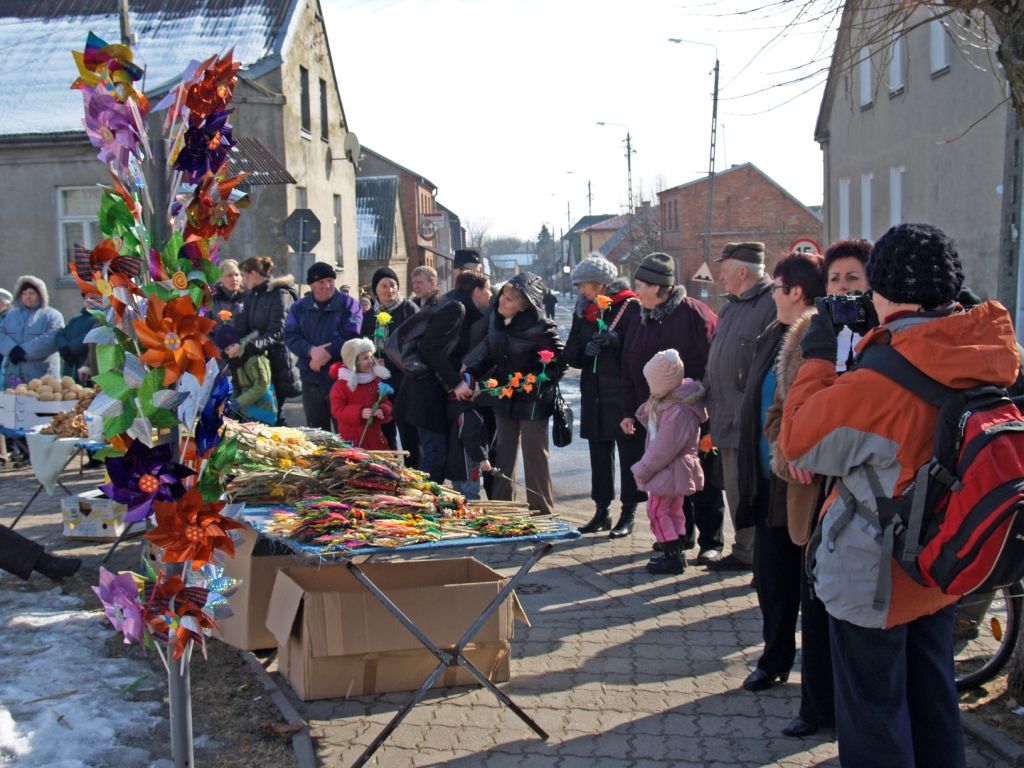 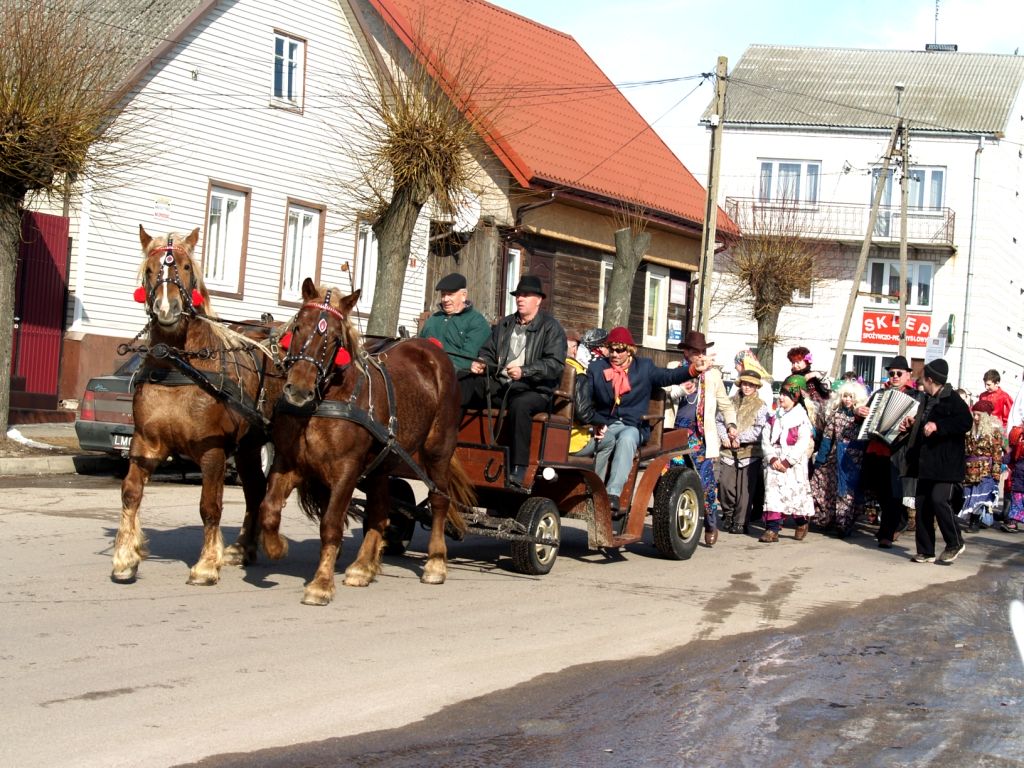