General information
Rajgród commune is situated in the northern part of Grajewo district, at the border with Podlaskie and Warmińsko-Mazurskie Voivodeships. Rajgród neighbours the following communes: Prostki, Kalinowo, Bargłów Kościelny, Goniądz and Grajewo.
The area of the commune comprises predominantly arable fields, but forests also take up a substantial part (28.37%). The forest complex is managed and supervised by Rajgród forest division. The commune borders Biebrza National Park from the southeast. Slightly more than 6% of the area of the commune is taken by waters, mainly the Rajgrodzkie Lake and intensely meandering river Jegrznia, which starts in the eastern bay of the lake, continues its course across Dręstwo Lake and enters the vast area of the Czerwone Bagno (Red Marsh Nature Reserve) in Biebrza National Park. Kanał Kuwasy (Kuwasy Channel) originates in the southern bay of the lake and together with smaller channels and drainage ditches forms a network of surface waters in the farming part of the commune. The size of Rajgród commune is 207.16 km2. Around 5,620 people live there and the average population is 27 people/km2. Rajgród commune is one of farming and tourist character. Breeding of dairy cattle and fruit picking dominate the activity with occasional ecological farming. Rajgród commune is a very popular tourist destination for those who seek relaxation time near the water. 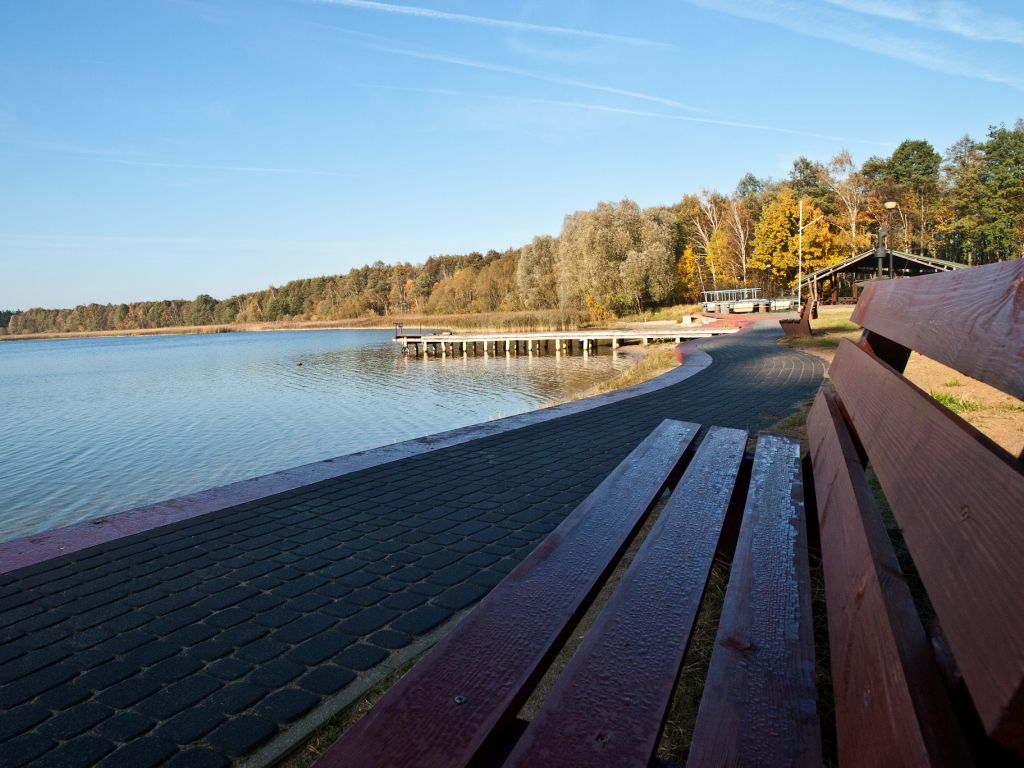 History
The beginnings of Rajgród date back to the Middle Ages. At that time, the Yotvingians established the Raj fortification at the Rajgrodzkie Lake – it was utterly destroyed in the mid-13th century by the Masovian-Russian revenge crusade. Across the centuries, the fortified town kept “changing hands” – after 1422, it became a Lithuanian fortification (this is when its charter was granted and a parish was established within its borders). At the beginning of the 16th century, prince Mikołaj Radziwiłł incorporated it into the so-called Radziwiłł Duchy. In 1568, Anna Radziwiłł nee Kiszczyna granted Rajgród with Magdeburg rights, and after the Union of Lublin dating back to 1569, Rajgród was incorporated into the Crown of the Kingdom of Poland. Since 1571, until the Third Partition of Poland, Rajgród was a royal town. After the Third Partition of Poland, it became a part of New East Prussia, and after the Treaties of Tilsit in 1807, the city was taken over by Russia. When January Uprising was thwarted, Rajgród lost its town rights and regained them only in 1924. The city was destroyed during the World War I after heavy Prussian artillery fire. At the turn of the 20th century, as much as 50% of Rajgród citizens were Jewish. In the interwar period, this percentage fell to 30%, and on 2 November 1942, the remaining citizens of the Jewish origin were deported from Rajgród ghetto to Bogusze, and then to Treblinka extermination camp. 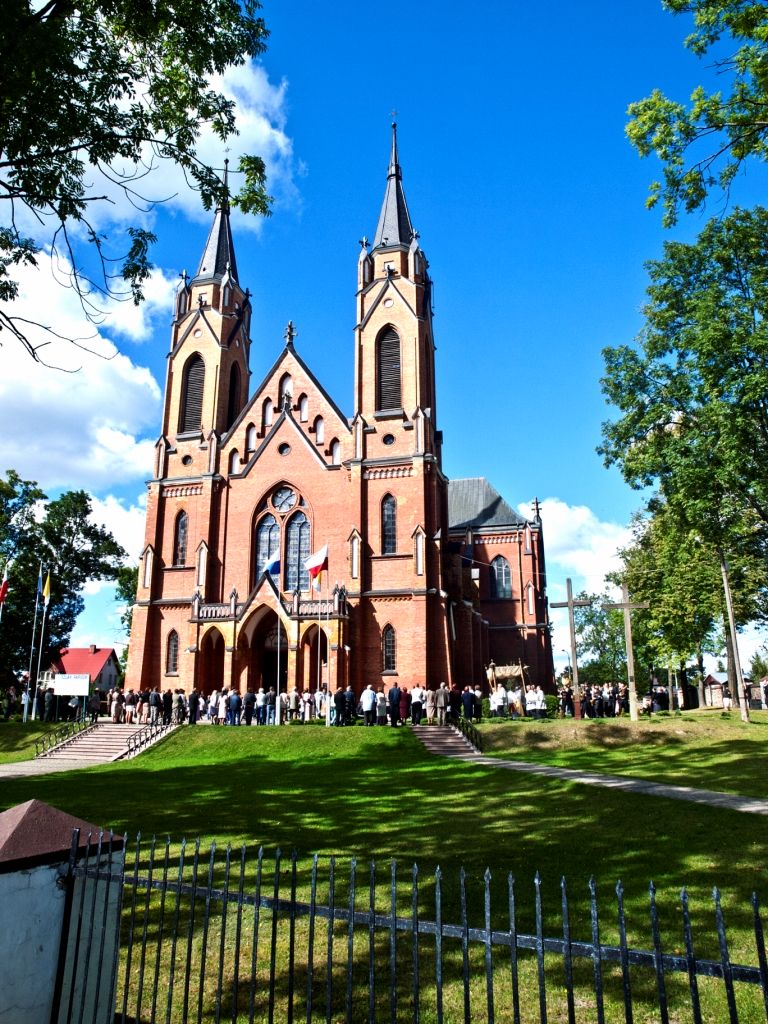 Most important heritage sites
- Town market square – currently the Millennial Square (pl. 1000-lecia). It has preserved its original triangular shape, as it was established at the forking of the road which exited the Rajgród manor (one of the roads headed towards Masovia, the other one – towards Lithuania). After World War II, the square was planted with trees and today it features tenement houses from the beginning of the 20th century.
- B.V.M. Nativity Parish Church in Rajgród. Gothic Revival of red bricks, erected in 1906–1912, with a nave, two aisles and a transept. The altar features a 17th-century painting of Our Lady of Rajgród – which is believed holy by many followers. There are stained glass windows in the aisles of the church. The Rajgród Parish was founded in 1519 by Mikołaj Radziwiłł.
- Wooden roadside shrine dating back to the mid-19th century at Warszawska street in Rajgród. Its interiors feature a cross with a Christ Crucified relief from the first half of the 17th century.
- Cemetery chapel in Rajgród (opposite the church) erected in classicistic style in 1826.
- Manor house in Opartowo founded in the 19th century at the bank of Rajgrodzkie Lake by Niedźwiecki family – former owners of Opartowo.
- Water mill in Wojdy at Jegrznia river, established in 1911 by Wacław Mościcki – the last owner of Wojdy estate, which used to include ca. 100 fish ponds.
- Adalbert of Prague Parish Church in Rydzewo, built in 1860s on a rectangular plan. Inside the wooden temple, there are historical organs. 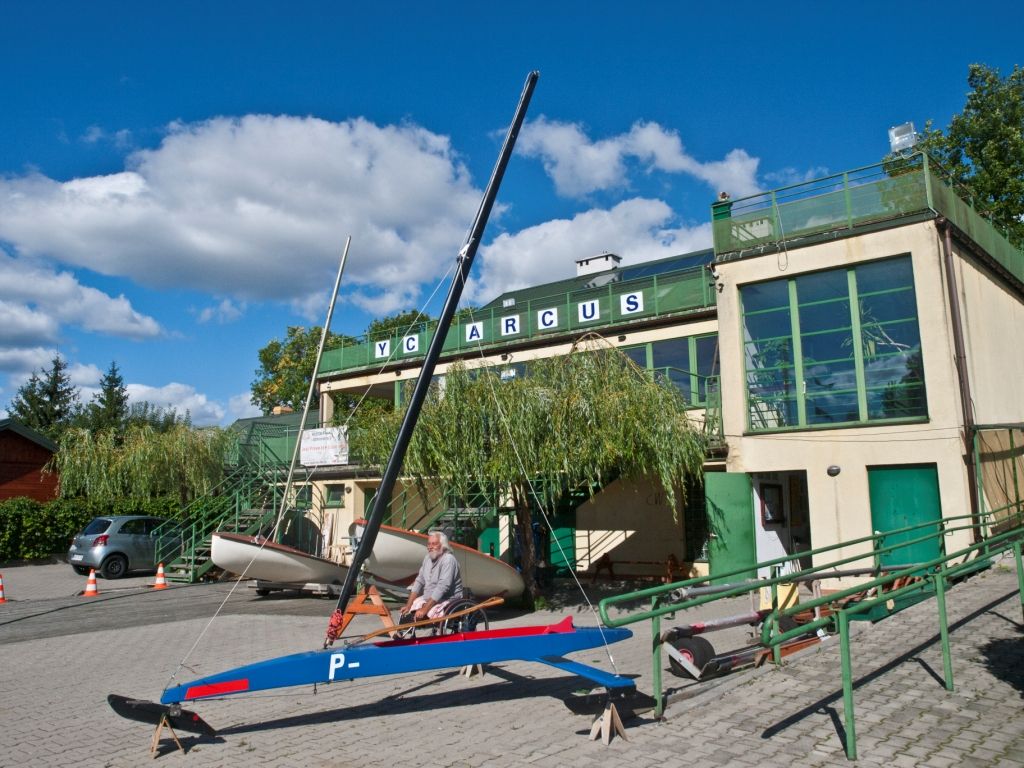 Attractions and tourist assets
The rich natural assets of this area contributed to the development of tourism and agritourism. There are recreation centres in the commune at Rajgrodzkie and Dreństwo Lake with their own catering resources, e.g. Ośrodek Szkoleniowo-Wypoczynkowy BGŻ S.A. (Training-Recreation Centre) Knieja [Forest] of the highest standard and wide range of services, open all year round. Zagroda Kuwasy restaurant in Woźnawieś (a hotel and catering facility) is situated right at the border with Biebrza National Park. There are other numerous accommodation facilities: agritourism farms or Scout facility Orle Gniazdo (located in the Okoniówek forest which is within the administrative borders of the town), and a few groups of holiday cottages, located at the above mentioned lake. There are also two restaurant bars and one roadside bar. 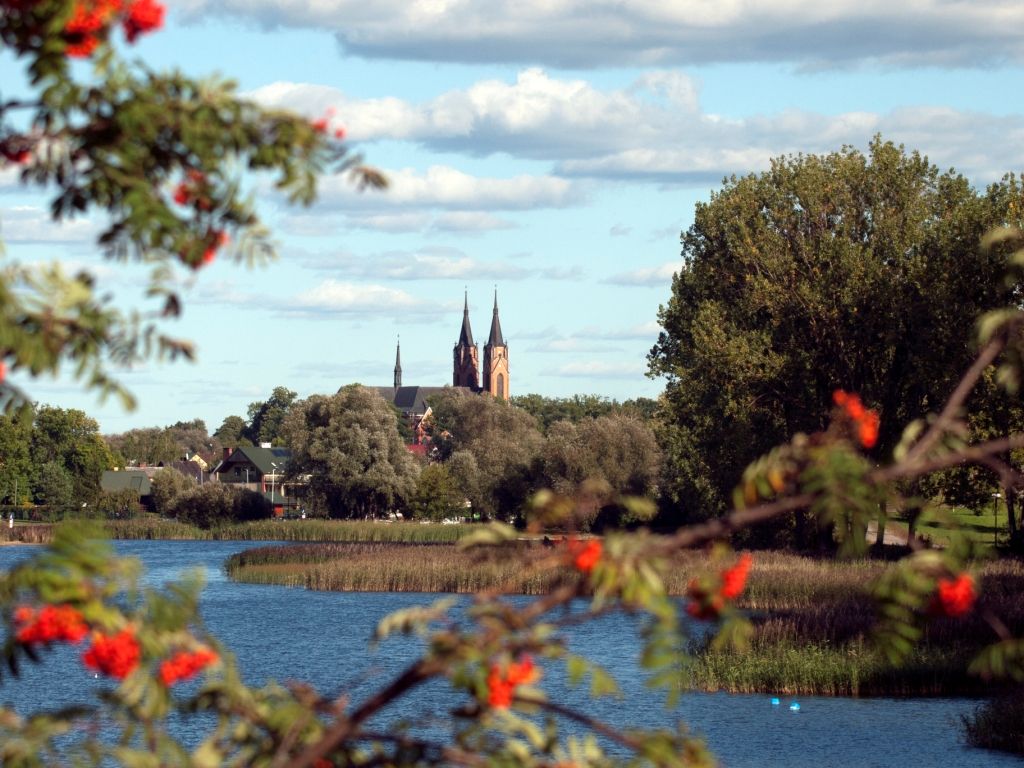 The post-glacial Rajgrodzkie Lake, the waters of which are categorised as class I quality, is a typical finger lake of a total size area of 15.1 km² and the maximum depth of 52 m. The waters of the Rajgrodzkie Lake supply the peat bogs of Red Marsh via Jegrznia river and Kanał Kuwasy channel. The Red Marsh is a nature reserve located within the borders of Biebrza National Park. The proximity to the park makes this part of the country one of the most attractive tourist destinations in Poland. Thanks to numerous rivers and channels, the Rajgrodzkie Lake is a part of the water trail from Olecko to Augustów. The rich coastal vegetation, in particular the lush greenery of pine tree forests at the southern river arm and the main reservoir create a special microclimate. The lake is a habitat for numerous bird species: grebes, swans, cormorants, terns and a few species of wild ducks. The waters are populated by: pikes, perches, burbots, bleaks, whitefish, vendace, roach, breams. The curvy coastline of the lake (56 km) and its highly elongated arms contribute to the development of sailing – the distance of one section of the lake is 12 km, and winds blow mainly from north-west. 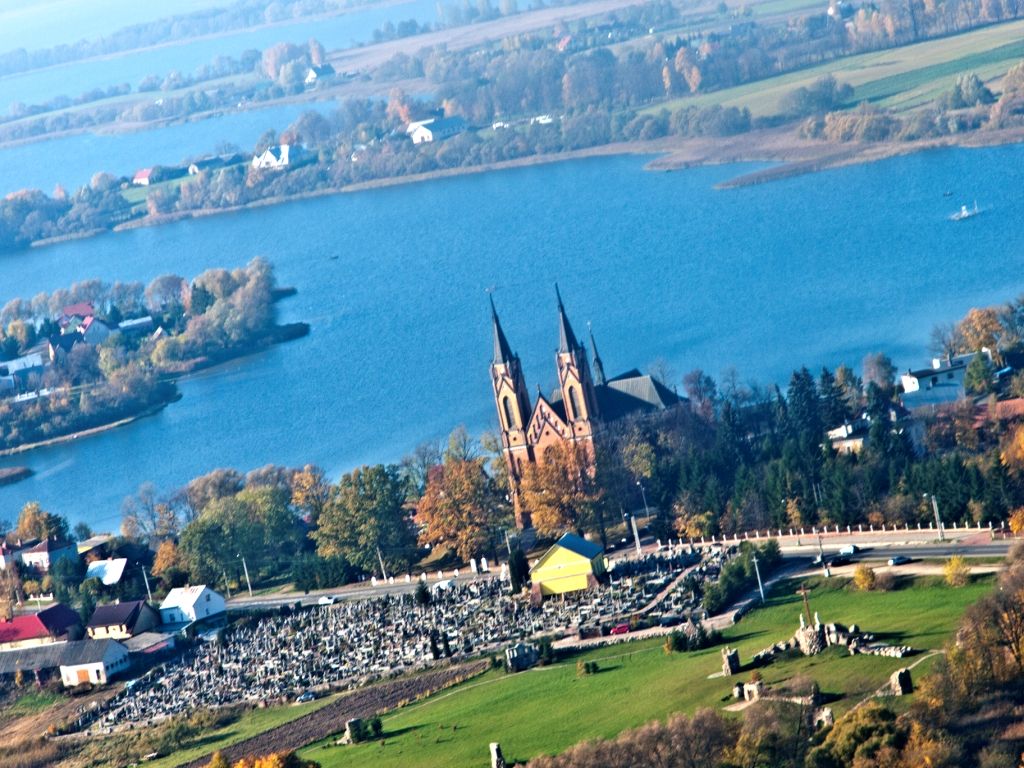 Góra Zamkowa mountain in Rajgród is located on the Rajgrodzkie Lake peninsula which is the oldest part of the town. In the past, it was a Yotvingians manor, then it belonged to the prince and since 1571 until the end of the 18th century it was the manor house of the head of Rajgród commune. Currently, the panorama of the city and the vicinity of the lake might be admired from the 15 m high mountain. There is a bandstand on the side of the hill, and the municipal beach at the foot of the hill.
Rajgród commune has an active Yacht Club Arcus, which administers the port site and is accessible for the handicapped. Every year, the club organises boat races for the Blue Ribbon of the Rajgród Lake, and international regatta for disabled sailors.
The local Henryk Sienkiewicz primary school (the grandfather of the famous writer was a forester in the nearby Woźnawieś) hosts the Zefir Sailor’s Club. Numerous recreation facilities provide access to watersports equipment.
Thanks to the funds from the Rural Development Programme, a promenade was constructed along the lake coast in Rajgród – a walking trail with benches, lamp posts, observation points and greenery. It enables the citizens and tourists to admire the panorama of Rajgrodzkie Lake, beautiful views of the area and unforgettable sunsets. This investment has made our commune more attractive and highlighted its values. 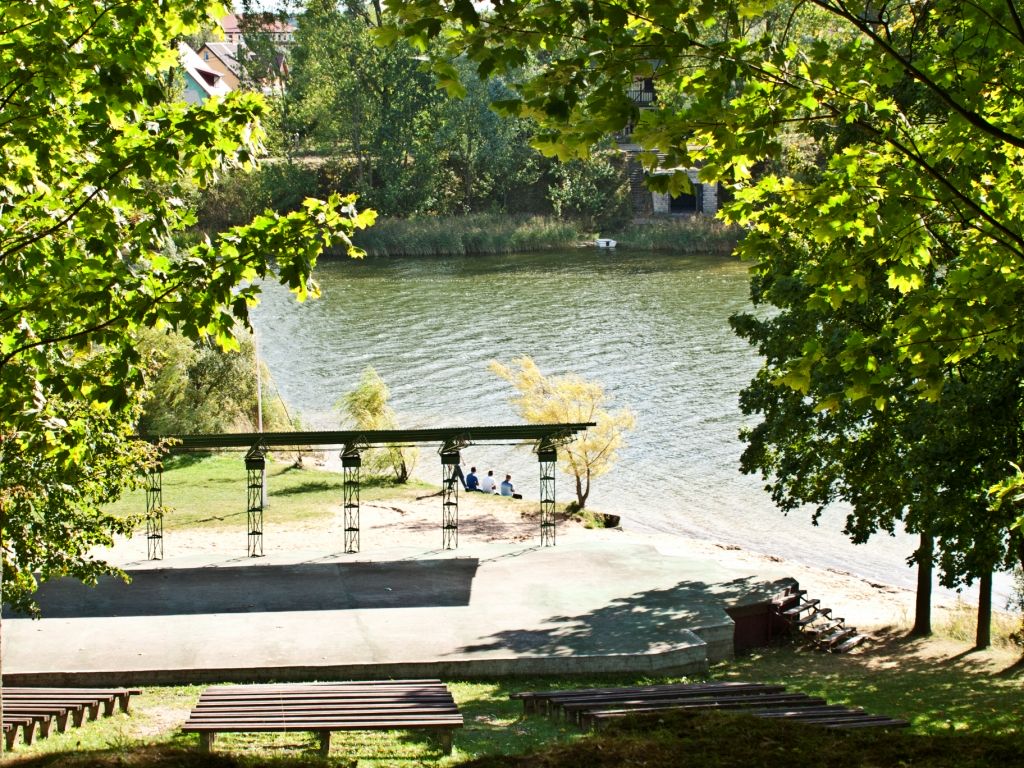 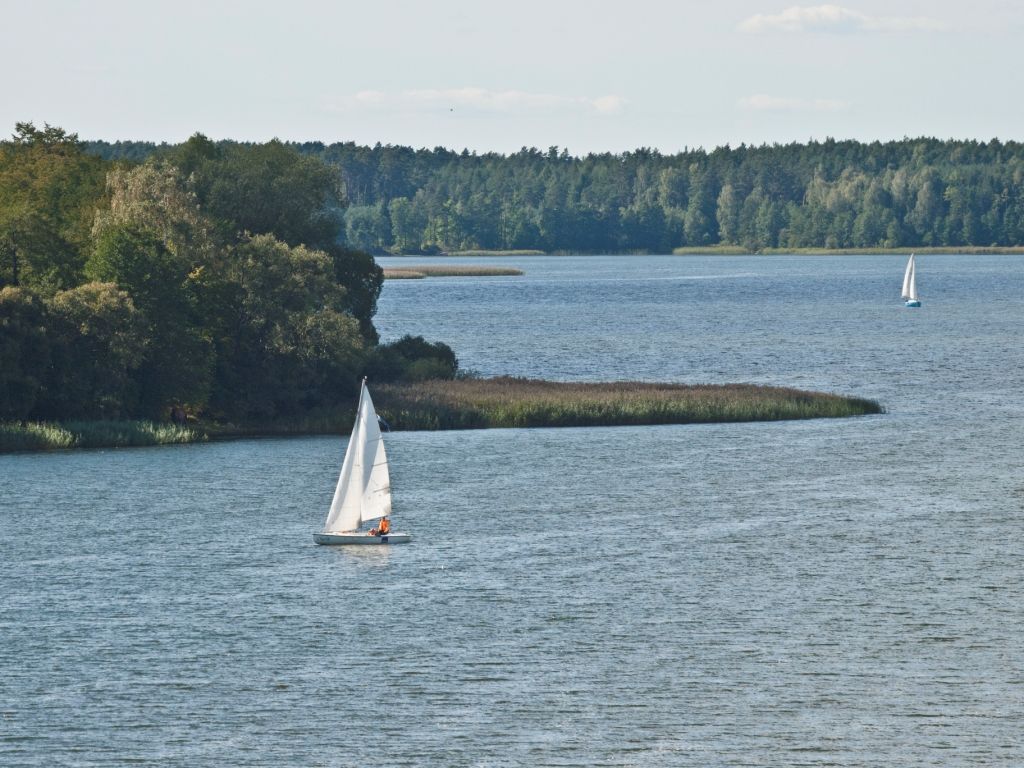 Culture
- A brass band operates at the Cultural Centre in Rajgród.

There are three active units of Volunteer Fire Department in the commune: OSP Rajgród, OSP Woźnawieś and OSP Rydzewo. 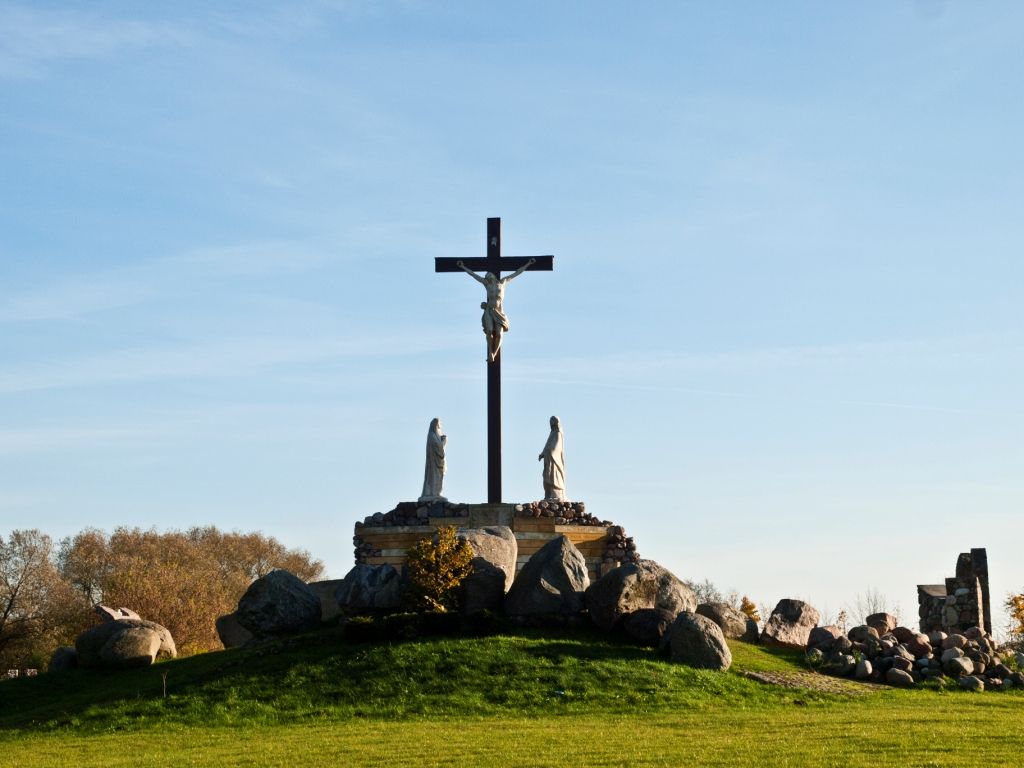