Church of Our Lady of the Angels in Downary

The Parish of Our Lady of the Angels in Downary has a short but interesting history. Its beginnings are connected with Fr. Ksawery Klimaszewski, who was born in that village. He was the one who suggested the construction of a local temple in 1921, after the church in Goniądz, to which the Downary inhabitants belonged, burnt in a fire. In the same year a church-building committee was established. It was decided to base the construction on the building of a former casino ruined during World War I, belonging to the Osowiec Fortress, in which the Russian army had garrisoned. Only the foundations and fragments of walls of the building survived, but the residents of Downary and the neighbouring villages gathered demolition bricks from the Russian barracks in a nearby Osowiec.
The works began after 1925, when the Roman Catholic parish in Downary was officially established. To the building of a casino, of a rectangular plan, a chancel was annexed, as well as a vestry and lower parts of a tower. In 1926 a design of a new church was ordered from engineer Pawlik from Białystok, and at that time the construction works began according to his design. The works were finished in 1930, and on 5th October bishop Romuald Jałbrzykowski consecrated the new church. Units of cavalry and infantry of the Border Protection Corps in the nearby Osowiec were invited for the celebration.
During World War II, the then rector saved the church from demolition as he ‘begged the Germans down on his knees’ not to blow up the church. The only evidence of the front line passing the area in 1944 were traces of bullets that got stuck in the walls of the building.
The church in Downary is a three-aisle, pseudo-basilica building (the nave is much taller than the aisles, but not illuminated with its own windows, as it should be in a basilica church). A slender tower covered with a pyramidal dome hovers over the facade. Two low vestries adjoin the chancel, which is lower than the aisles and strengthened with buttresses. The nave is covered with a barrel vault on saddle-bows (vault belts), and the aisles with flat ceilings. A plaque commemorating Fr. Ksawery Klimaszewski is embedded into the facade of the temple.
Inside the church we can admire three altars constructed at the turn of the 1960s and 1970s can. The Neo-Baroque main altar is devoted to the patroness of the church, Our Lady of the Angels. A painting located in it was donated by Fr. Klimaszewski in the 1930s. In the niche of the left altar there is a modern figure of Christ, in the right one there is a painting of Our Lady of the Gate of Dawn, descended from the garrison church in the Osowiec Fortress. The walls and ceilings are covered with a polychrome from 1998, painted by Marek Karp.
Next to the church there is an old parsonage in a manorial style, built in the years 1927-1928. 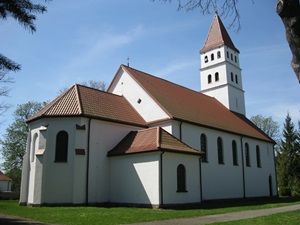