The oldest wooden church in Podlaskie Voivodeship has survived in Kamienna Stara. It’s a former manorial Chapel of St. Anne, belonging to the Wiesiołowski family, dated back to about 1610. It was build in log construction, its six-side hip roof is covered with shingle, the walls are protected by a vertical boarding with listing. The chapel represents the most simple type of an aisleless temple composed of a rectangular nave and a chancel enclosed from three sides, with an adjacent low vestry. The choir balcony, spread in the eastern part of the nave, delimits the zone of the church-porch. This uncomplicated spatial arrangement and a multi hipped roof shows that the builders were influenced by late Gothic architecture.
The most precious and actually the only (apart from a stone baptismal font) element of the chapel equipment is its beautiful main altar. There is a signature of the painter – entwined initials of TSW, a ‘Grod.’ Abbreviation, meaning ‘Grodno’, and date 1610.
The wooden altar has a form of triptych with immobile wings and a decorative finial, resting on a predella. Traditional ornaments, typical of the Northern European Mannerism, were used for its decoration: diamond ornaments of bands and ferrules, as well as the gildings and silver plating. Images were painted with the use of gilded floral ornament squeezed in priming paint. The artist has chosen firm, deep colours, warm in the central part of the composition and cool on the predella and wings.
In the foreground there is a painting of St. Anne, which illustrates the name of the chapel. St. Anne and her daughter Mary are sitting on a wide bench, facing each other and Child Jesus held by Mary. Jesus leans toward St. Anne who is holding his outstretched little hand. The Child is holding a stem of grapes in the other hand. Both female saints are wearing long dresses, colourful coats and white headscarves wrapped around their heads and necks. In the background of the scene there is a green unfolded curtain, from under which fleecy clouds emerge, unveiling a fragment of Heaven and a group of cherubs accompanying the saints.
On the wings of the triptych there are saints from the early times of Christianity: Catherine of Alexandria and Helen, mother of Emperor Constantine. Facing the scene with St. Anne, they are holding their attributes: St. Catherin a palm, symbol of martyrdom, and St. Helen the True Cross as she was the one who found it. Moreover, at the feet of St. Catherine there is a rack which was the instrument of her torture. The predella (base of the altar) has been decorated with a representation of Annunciation: Mary, who seems silent and touched, is accepting the announcement of Archangel Gabriel with wind-blown wings and hair. Also here an unfolded curtain and light pushing its way through the clouds symbolize the presence of God in the earthly world.
In the finial of the altar there is the scene of Crucifixion. The Cross with Christ on it, and two figures: of Mary and St. John fill the oval field of the painting entirely. This arrangement of the scenes from the New Testament in the altar presents the summary of the Salvation History, from Mary’s ‘Fiat’ to Christ’s death. Its quintessence lays in Child Jesus, the central figure of the triptych, who is holding a bunch of grapes – the symbol of the Passion and its fruit: the Eucharist.
An interesting aspect of the iconography of the altar is stressing the cult of the Holy Women. It may mean that a woman was the founder of it; probably Aleksandra Marianna Wiesiołowska, whose both patronesses – Mary and Anne – were depicted in the main field. The saints shown on the wings are probably patronesses of the relatives of the Wiesiołowski family – Katarzyna and Helena of the house Śleszycki – mentioned in Krzysztof’s last will as his heiresses. They could have been daughters of Krzysztof’s sister Katarzyna.
In the church-porch we can see a stone stoup (maybe a baptismal font) with the date 1609 engraved on it. 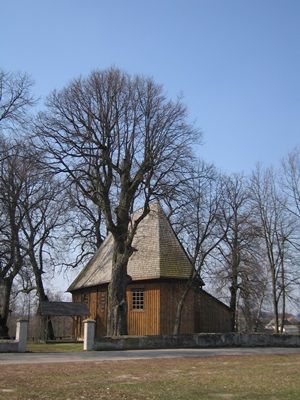