Church of St. Peter and Paul the Apostles in Trzcianne

The Parish of St. Peter and Paul the Apostles in Trzcianne must have been founded already in the 15th century, for in a document from 1496, signed by Alexander Jagiellon, the Grand Duke of Lithuania, there is a mention of the endowment of a church in Trzcianne. The first temple probably survived until 1613, when the then vicar, Fr. Seweryn Jeżewski, began to erect a new church at his own expense. According to the relation of the inspectors the temple was an impressive building situated on a hill, enlarged later with two chapels founded by the Bajkowski and Niewiarowski families. It survived until 1745, mainly due to the general overhaul at the turn of the 17th and 18th centuries. In the severely demolished building some logs, the roof covering, windows, pews and the tabernacle were exchanged at that time, and a belfry was constructed. Unfortunately, in 1745 the church burnt in a fire, because it was struck by lightning. A year later a new temple was already standing in its place. We know from written sources that it had two towers at the front and two chapels on both sides of the aisle corps.
A contemporary brick church was built in 1846, mainly due to the assistance of Wojciech Wilhelm Ołdakowski, marshal of the nobility in Białystok Oblast and an owner of the estate in Szorce Krynica. The aisle corps of the church, connected to the chancel, is built on a rectangular plan. In the years 1948-1949 two spacious chapels, resembling transept arms, were built as annexes. Three vestries are adjacent to the chancel: two by side elevations and one by the back elevation. The latter was added in the 1940s. The central part of the facade is a bit advanced, preceded by a porch in a form of a portico. Its second storey with a semicircular, so-called thermal, window, is collared with small volutes and surmounted with a triangular pinnacle. A one-storey, massive tower dominates over the facade; its elevations are divided with double pilasters, carrying the entablature.
Although the exterior of the church is devoid of typical style features, the interior can be called a typically classical one. It was divided with Tuscan columns into three aisles. The nave is covered with a barrel vault on saddle-bows, that is vault belts, the aisles are covered with flat ceilings. A uniform rhythm of colonnades guides our eyes towards the chancel, in the wall of which, over the main altar, there is a semicircular window with a stained glass depicting the dove of the Holy Spirit. Also the white and golden colour scheme of the interior refers to the classical style. At both sides of the chancel there are two-storey auxiliary rooms – a vestry and a treasury, matronea of which are open towards the chancel with rectangular clearances.
The altars were made in the 1960s. In the main one there is a painting of St. Peter and Paul the Apostles, ascribed to Jan Gloger, the owner of the estate in Jeżewo, the father of a well-known historian and excursionist Zygmunt Gloger. In the aisle there is a folk Baroque image of Our Lady of the Scapular from the 18th century, covered with a silver dress. It is a remnant of the Scapular Brotherhood established in 1678 by Helena Bajkowska, the first location of which was the Bajkowski family chapel by the 17th-century church in Trzcianne. In the wall of the church there is an embedded epitaph of black marble, dedicated to the founder, Wojciech Ołdakowski, who died in 1846.
In front of the church stands a three-storey stone belfry-gate built in 1873. Its quoins, cornices, window frameworks and pilasters in the upper storey are covered with plaster, which is in contrast to the stone elevations. Inside the belfry hangs a late-Gothic bell from 1522. 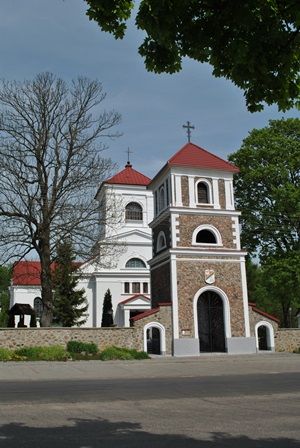