Jewish cemetery, founded in the 19th century, built on the plan similar to a trapezium. Located in the southern part of John Paul II Street, currently between inhabited settlements, area of about 1.2 ha. The cemetery was destroyed during World War II. The cemetery is surrounded with a new fence of white silicate brick with one gate. Behind the cemetery's entrance gate there is a granite monument with inscriptions in Polish and Hebrew: IN MEMORY OF/ THE JEWS FROM DĄBROWA/ BURIED/ IN THE CEMETERY/ AND PLACES OF THEIR EXTERMINATION,/ DEPORTED IN THE YEARS 1939-1945/ FOUNDERS OF THE FENCE:/ RENA HOLSZTEJN, LILLY GRITZ, E. GRABIŃSKI. The territory of the cemetery overgrown with trees and self-seedings, unreadable layout, overgrown gravestones. In the eighties of the 20th century, 269 graves were documented. The condition of the cemetery was even then evaluated as unsatisfactory. At present, most tombstones damaged, sunken into the ground, inscriptions illegible. It is possible, however, to distinguish between all kinds of tombstones, including concrete graves resembling sarcophagi with additional matzevas, hidden in the so-called concrete ‘hood’. Despite its poor condition, the cemetery in Dąbrowa is one of the most interesting Jewish cemeteries of Podlaskie Voivodeship. Before WWII, near Suchowolska and Szkolna streets, there was another, at that time already closed, old cemetery; today non-existent. 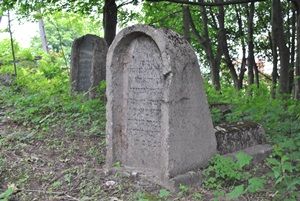