In small Dolistowo Stare the Church of St. Lawrence towers over the meadows of the Biebrza River. The first temple was already standing in this place probably in the second half of the 15th century, and the documents testifying its existence come from the fist years of the 16th century. The oldest Dolistowo churches were built of wood, but in early 17th century Krzysztof Wiesiołowski, a marshal of the Grand Duchy of Lithuania and the leaseholder of Dolistowo allocated a sum of money for bricking a new church. however, the operation was not completed and Wiesiołowski commissioned its continuation in his last will to his wife, Aleksandra from the house Sobieski. As a result, only the foundation and a crypt used for burials, were finished. At that time the wooden temple served as a parish church. The works of bricking the church were commenced by Izabela Branicka from the house Poniatowski, a widow of Jan Klemens, the owner of the Białystok goods and leaseholder of Dolistowo. Izabela asked Jan Zschernig, her court architect, to design the new temple. At first he worked as a construction manager at one of the first self-reliant foundations of his patroness – the parish church in Bielsk Podlaski. At that time he worked under supervision of Szymon Bogumił Zug, an outstanding architect of the classicism era from Warsaw. Soon after becoming independent, Zschernig – as an architect – appeared for instance at the construction of a wooden Orthodox church in Ryboły and a Bernardine monastery complex in Tykocin.
In 1789 in Dolistowo Zschernig designed an aisleless church topped with a semicircular apse. The shape was forced by the already existing foundation, which was uncovered, levelled and strengthened, preparing it to the new construction. The dominant of the severe body of the church is a screen facade, wider than the nave corps, and surmounted with a crow-stepped attic covering the roof. The mixture of such elements as rustication, pilasters supporting the entablature and the oculus shifts our attention from other elevations, devoid of details. This kind of solution in terms of the corps of a church is typical of the early Classicism, introduced to the Podlasie region in late 18th century by Izabela Branicka.
The church was finished in 1791 and consecrated on 23rd October. A year later Antoni Herliczka, a painter from Białystok in the service of the Branicki family, painted two works for the side altars. They were created according to copperplates presented by Izabela, who was the one who paid for the both works of art. The wooden main altar with the crucifix adorning it were brought from the previous, wooden church. The figure of crucified Christ draws our attention with a perfectly represented muscularity and the expression of pain on the face. Around the crucifix there are votive offerings made of noble metals, mentioned in the inspection from 1820, depicting e. g. the sun, the moon, hearts, a leg, a hand and a dove – the Holy Spirit. In the niches cut in the side walls of the church there are two side altars in a form of pillar arcades. In the left altar there is a painting of St. Lawrence the Martyr, and in the right – of Our Lady of the Rosary (from mid-18th century). It is worth noticing an 18th-century image of the Mother and the Child, covered with a jacket. A Baroque baptismal font embellished with a motif of succulent acanthus leafs also comes from the old church. A wooden classical pulpit was made by a local carpenter Maciej, also paid by Izabela, in 1792. A wooden coffered ceiling of the temple, covered with a polychrome by Józef Łotowski, was created at the turn of the 1970s and 1980s.
In the chancel there is a tablet commemorating the Servant of God Piotr Semenenko who was baptized in the church in 1814.
Next to the church we can see a cobblestone, two-storey belfry from 1841. Behind the fence of the churchyard cemetery a brick parsonage from 1930 is located. 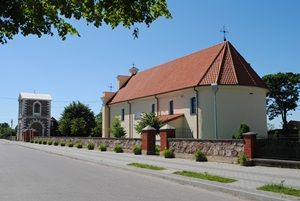