Church of St. John the Baptist in Brzozowa

Church of St. John the Baptist in Brzozowa is located on the eastern edge of the village, near the bridge on the Brzozówka River – an eternal border between Lithuania and the Crown. Its beginnings date back to the first half of the 16th century, when a newly established village of Brzozowa was a part of the parish in Kalinówka Kościelna. Due to the large distance to the parish church, a wooden chapel was built in Brzozowa. This fact is known because of a document from 1534 in which King Sigismund Augustus confirmed the erection act for a church in Kalinówka, allowing the construction of a chapel in the newly established village of Nowa Wieś (nowadays Brzozowa), dedicated to the Nativity of the Theotokos, St. Matthew, St. Matthias, St. Nicolas, St. Anthony of Padua and St. Leonard. We d not know, however, whether the foundation was accomplished at that time. It is certain that a wooden church was standing in Brzozowa in 1633 and it was in a very bad condition.
The next churches erected in this place were wooden. The rector of Kalinowo, Fr. Mateusz Babecki, started the construction of a brick church not sooner than in 1859. He finished it with help of the inhabitants of Bobrówka and Brzozówka villages in 1863. But a year later the tsarist officials discovered the lack of appropriate permits and, as a result of their investigation, they punished the dean of Białystok, Fr. Feliks Bańkowski, with a fine of 200 roubles.
An important event in the history of the church was granting it the rank of a parish temple, which took place at the turn of the 19th and 20th centuries. However, the exact date of the branch church becoming self-reliant is not known.
The church in Brzozowa is an aisleless temple, with a separate chancel, enclosed in a simple manner, with two low vestries adjacent to it. A church-porch, which constitutes a separate structure from 1924, is annexed to the church. The building is almost an exact copy of the wooden, 18th-century church in Kalinówka Kościelna. Cobblestone was used for the construction, which was probably due to the availability of this material in the Biebrza valley. What is more, building churches of cobblestone became popular in the second half of the 19th century in the north-eastern part of the present Podlaskie Voivodeship. An irregular texture of their elevations was additionally emphasized by plastering some parts of the walls for contrast. It was also done in Brzozowa, where the facade of the church and the church-porches were covered with white plaster, thus underlining the corner lesenes, the pinnacles of the vestry and the chancel, as well as the frameworks of windows and doors.
The Neo-Baroque main altar, created by master Burggreiff, was founded in 1863 by Kazimierz and Adolf Moniuszko. In its main field there is an image of St. John the Baptist, in the side altars, Neo-Baroque as well, we can see paintings of St. Matthew and St. Anthony of Padua.
A two-storey belfry, composed into a stone wall surrounding the churchyard cemetery, was built in a similar manner to the church. Its stone elevations have been divided into rectangular areas by means of thin lesenes and cornices. White plaster is also covering the frameworks of circular window openings and ogive voice openings in the second storey. 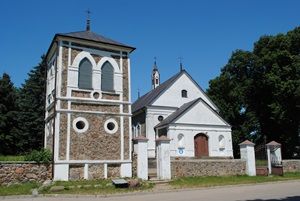