The first manor in Mikicin was built by Jan Sławski between the end of the 15th and beginning of the 16th centuries. In the second half of the 17th century the manor belonged to the Pęski family and in the 16th century to, among others: Stanisław Tarus (1621), Jakub Gobiaty, Aleksandra Wiesiołowska and Samuel and Konstancja Bidrzycki. Between late 17th and early 18th centuries the property was managed by Florian Młodnicki. In 1740 the property went into the hands of the Kuczyński family, who decorated the manor in the Baroque style. Gardens divided by alleys into rectangular quarters were created on a terrain forming three terraces descending into the small Biebła River. Courtyards were built on the highest terrace and a manor and farm buildings were situated nearby. In the first half of the 19th century the land was bought by Kazimierz Moniuszko, the owner of the neighbouring Moniuszko estate, and his son Adolf became the manager of this estate, keeping this seat almost until the end of the century. In the 1840s Kazimierz Moniuszko began redeveloping the complex and later his son continued the work. After the son’s death (1897), the manor went into the hands of his descendants. The Kozłowski brothers and their descendants bought most of the land and managed it until 1940. The manor suffered substantial damage during the Polish-Soviet war in the years 1919-1921 and during WWII. In 1940 a "kolkhoz" was established here, and during the German occupation troops were stationed on the premises of the property. It was also then that Jan Kozłowski, the last owner of Mikicin, died. He was taking refuge in the village and after his death buried in secrecy in a cemetery in Dolistowo. After the war the manor, like many others, was transformed into a State Agricultural Farm.
The manor complex in Mikicin consisted of two main parts – a farm part, situated on the eastern side of the property, with a big barn, a granary and livestock buildings; and a representative part with a classical manor erected in 1847, with an elliptical driveway and an alley. Behind the manor, where the park once had been, were the orchards.
The manor house is a brick building, with plastered walls and a basement with a barrel vault roof. It was built on a rectangular plan and covered with a double-pitched roof. The elevations are surmounted with a prominent bevelled crowning cornice. The window openings also have window heads in the form of bevelled cornices. The front entrance is preceded by a porch with regular and engaged columns supporting the terrace. The entrance is formed of French panelled doors. The interior is a two-bay layout in the eastern part, three-bay in the western. In the roof slope there is a facade connected to the terrace and surmounted with a triangular pediment with a semicircular window opening. The terrace is surrounded by a cast iron balustrade. Currently the manor and the remains of the park are falling into decay. A leaky roof, walls full of holes, empty windows and a compromised roof structure add to the further destruction of the building. Unsecured and devastated, it is seeing its last days. 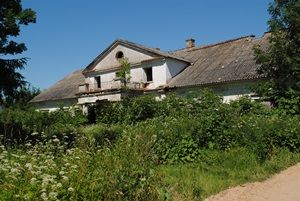