Roman Catholic cemetery in the parish of the Elevation of the Holy Cross, Bargłów Kościelny

Bargłów Kościelny, Roman Catholic cemetery in the parish of the Elevation of the Holy Cross, founded in the first half of the 19th century, on an irregular polygonal plan. Located in the south-western part of the town, on a small hill, with the area of over 2 ha. It has a chain-link fence from late 20th century. An alley lane leads from the main gate to the burial chapel of the Karwowski family, nobility from Wólka Karwowska. The chapel was erected in 1842 in the classical style, on a rectangular plan. Built of brick, covered with gable roof. Tri-axle front façade flanked by two pilasters; in the middle it is separated by two half-columns. In each of its three separate fields, over a narrow ledge, there are semicircular niches/blind recesses. Before renovation drawings of Christian symbols hung in blind niches, and in the central niche – a plaque with an  already obliterated inscription (in early 21st century a part was still visible with the name of Klemens Karwowski). On the architrave (over the pilasters) were the words: BLESSED ARE THOSE WHO DIE IN THE LORD. Beside the chapel 'a family tomb, the tomb of the founders and in it, under an indult granted by the late Paweł Straszyński, Bishop of Augustów, an Eucharistic celebration is to be held as many times as needed.’ Inside, by the south wall, a Baroque wooden polychrome altar moved here from the church in Rajgród. The altar dates back to the 18th/19th century, in its crowning a painting of St. Isidore the Farmer in a tondo, surrounded by a gold frame. In the main part of the altar (in place of the image) – a folk sculpture of Christ on the cross from the 20th century. Near the chapel, a destroyed tomb slab of the parish priest Piotr Iwanowski d.1906, a monument of Fr. Vincent Błażewicz d.1929, Father Florian Harabuda d.1940. Directly behind the Karwowski chapel, from its eastern façade, there is a quarter for the graves of Bargłów priests. The cemetery was the site of executions during World War II. There are a few crosses and iron gravestones from Sztabin Steelworks. There are about 10 gravestones from the second half of the 19th century. 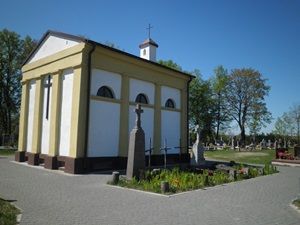